Currently the Screen Mirror works by reading whatever a monitor/TV is displaying, translating it into colours that a user can recognise.

I would like to see a feature where Nanoleaf App can receive inputs from a local meteorological service; interpreting dynamic weather patterns on the light panels.

Interesting. This is very much possible today using the openAPI on all the Nanoleaf devices.

But I am more interested in the interpretation of weather patterns on the Light Panels (or Canvas or Hexagons). Can you elaborate a bit?

The best setting Screen Mirror has for now is an option to "melt" from one colour to another, but this transition is done across all LEDs for each panel, creating a strafing effect rather than a natural change. To satisfy more complex patterns, therefore, the API would need to be tweaked so an animation can trigger one LED in a panel, independently of every other LED in that same panel. It doesn't have to be just the weather, so let's consider the Shapes system in another example below.

Say you have a young child and want to tell a bedtime story. Currently you could make shapes of a hero fighting a monster, yet because the LEDs of a panel light up all together or in a line, they are currently very crude, and it would be difficult to convey the narrative without LOTS of panels to work with. But, what if you had control over what every LED was doing versus every panel?!

The effects will never be as sophsticated as today's screens (there are too few LEDs on a pixel-per-inch scale), but each system has enough in a panel for "abstract" experiences like you find in 16Bit games. So you could have toon-like weather reports, tell a story, play games, make stylised advertisements, paint pictures with it, and so on.

I've asked about such controls before for the earlier systems, but the option has been rejected every time… hopefully with Shapes, however, they will provide an opportunity, since users will (eventually) be working with multiple panels of different sizes and number of edges.

The panels do not provide control over each LED. Fundamentally that creates a problem of color mixing, and I am not sure it could even do anything like a 16 bit display, unless I misunderstand the concept of abstract experiences.

In anywise, to simulate a screen you simply have to throw more panels at your layout. And even the the no. of pixels per square inch, and even the total number of pixels is very small.

However, given the constraints, would you still be able to describe what weather patterns would look like on the panels? If possible that can then be implemented via the API.

[Please note my location is currently experiencing severe internet issues, so future replies may be delayed]

Since the Nanoleaf App offers no way to design animations without connected hardware, for the benefit of this demo, I have used elements of NORDGRÖNA’s “Convex Planner” to create a preview of how weather patterns may look with the Shapes system. This has been arranged in a configuration of 23 panels, though 30 or more might offer better results.

A large portion of the display may represent the sky, unless it needs more complex shapes, i.e. the Sun could be made of seven panels, whilst a cloud could be five panels. The link below then leads to a still image, showing possible animations the interface could display: 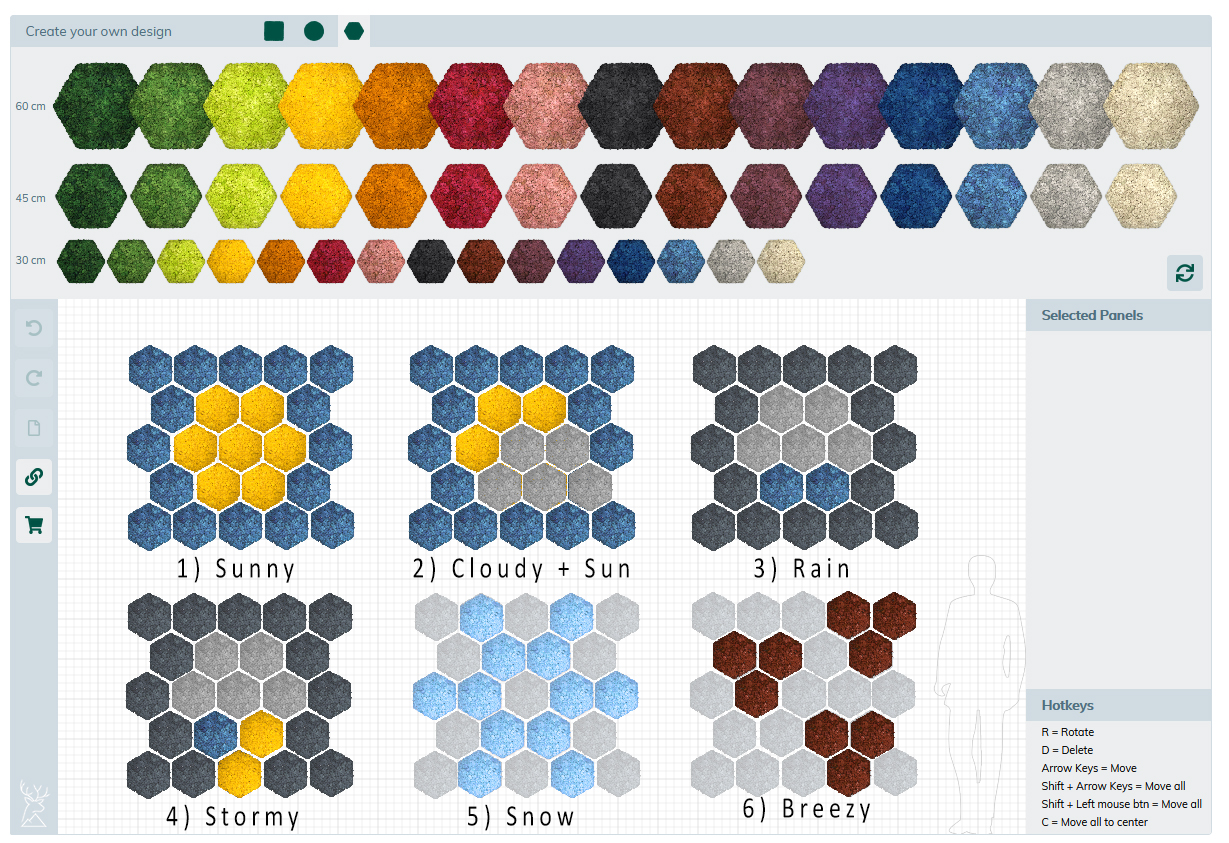 All elements of a weather symbol will fluctuate depending on what they are – the sun would melt from orange to yellow; the raincloud will alternate its two blue panels to simulate rain; the storm will quickly melt the yellow area for lightning, whilst flashing the sky; the snowflake will change blues to glitter; the “leaves” will randomly appear one side of the display and move quickly to exit the other…

There are plenty of other patterns that could be made, but I think you get the idea.

That's a great representation of the weather. And certainly doable.
The challenge however with showing any sort of an image, especially one that has feature in the x, y directions (for instance the fact that the sun is shown peeking from the top left corner of the clouds for a cloudy + sun weather, or the way stormy is represented) is that it depends on the shape of the layout.

Let me introduce the concept of the length-to-width ratio (LWR). If the LWR of a layout is between 0.5 and 2, it maybe possible to display this kind of an image, but layouts that have an LWR greater than 2, or smaller than 0.5, may not be able to show this kind of (pixelated even) images.

Then there is the issue of 'holes' in the layout. A lot of layouts might be hollow from the centre as well.

On very large layouts, where the LWR ration may be unfavourable, there might be still enough resolution to show an image. However it might be in a small section of the layout. This might even work to the advantage of the user, as it can be overlayed over an existing effect.

But I don't want to be the bearer of only bad news. I do notice the use of color. Maybe we can use color and some layout agnostic, effect / motion of said color to indicate the weather?
You got the wheels in my brain turning